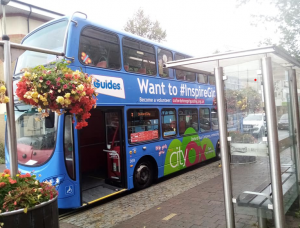 Oxfordshire is right on the edge of Anglia region, bordering both Girlguiding Midlands in the North and Girlguiding South West region in the South of the County. Our 11 divisions encompass both rural and urban areas; we have several military bases in the County and two universities which can sometimes mean a regular turnover of volunteers for units nearby. As I write this, I have been County Commissioner for just 4 weeks, starting the role at the beginning of September. It is an exciting time to begin this journey, more and more units are meeting in person again and we can start to plan larger events for the coming year and look at growing our membership further to ensure every girl and young woman in Oxfordshire has the opportunity to experience the fun and adventure of Girlguiding.

Every year we invite volunteers from across the County to come together for our Oxfordshire Celebrates event. Our afternoon tea, booked for May 2020, was one of the first casualties of the lockdown and as a result our awards committee had to get creative with presenting County and Good Service awards. Once the restrictions eased slightly there were several zoom meetings joined on mobile devices with a quick game of ‘who lives here’ followed by socially distanced presentations. One of the advantages of doing it this way was that girls and their families also got to share in the celebration and hear about the things their leaders had been doing. Some presentations involved a certain amount of subterfuge and recruiting family members to do the actual presentation during virtual meetings.

It isn’t only from within Girlguiding that our members have been recognised, the town of Wantage in South Oxfordshire awarded the Freedom of the Town to the youth organisations, including Girlguiding Wantage district, in recognition of the longstanding commitment they have made to the youth of the town and another leader was recognised with the High Sheriff’s award for her contribution to the community, including her Guiding service. 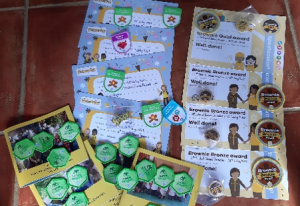 When the world was locked down many of our amazing volunteers brushed up on their tech skills or delivered parcels to keep their girls engaged and active. Many more were active in their local communities, as key workers, volunteering or making face coverings. We have been able to present a large number of bronze, silver and gold awards across the sections which is testament to not only the leaders but the girls and their families, many of whom told us that Guiding was sometimes the only social contact outside of the family each week, especially during the first lockdown.

Another casualty of the pandemic was our County camp, Quest, which should have taken place in 2020. Cancelling the event was disappointing but our Outdoor team got together and devised a Camp at Home challenge which saw Rainbows, Brownies, Guides, Rangers and Leaders, camp either in their gardens, or indoors in dens and blanket forts during May. Parents and siblings alike had the chance to join in with the Guiding adventure, many marshmallows were toasted, cakes were baked, and campfires sang around – even if we could only hear ourselves and the lone voice on zoom!

As we could still not meet in person by the end of 2020, we held a virtual Christmas party on Zoom where over 100 volunteers, from Young Leaders through to Trefoil Guild enjoyed spending an evening together from our own homes and every volunteer in the County felt recognised when a Christmas card and special badge arrived with the post.

As the country has started to tentatively open up, our fantastic volunteers have been getting their units out and about, enjoying the outdoors with camp days, day trips on narrowboats and for some even residentials over the Summer. In August, our Commissioners, President, Vice presidents and Advisers were able to gather in person at Jubilee House, our residential centre and headquarters, giving us the chance to meet and say thank you in person to Angela for guiding us through the last 5 years. For our County archivists, it was also a chance to show the work they had been doing kitting out their new building in preparation for more visitors in the coming years. 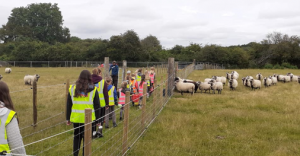 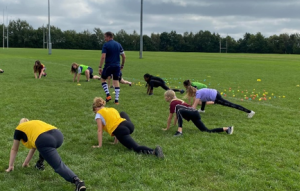