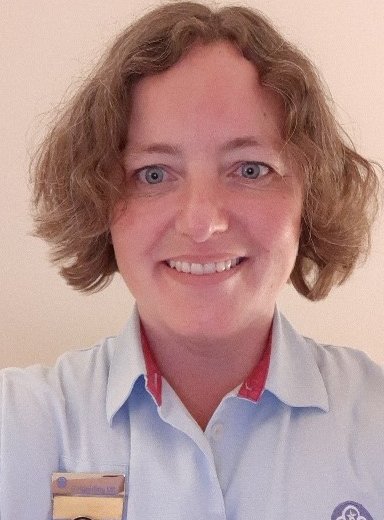 Guiding began in Oxfordshire from inception in 1910. Units were formed in towns and many small villages all over the county. Princess Mary as President visited the county many times – traveling with parents and donning her uniform as President and both visiting and inspecting many units.
The County Standard was produced in 1951 – every Guider making a stitch. It was dedicated in St Aldate’s Church, Oxford and the march-past took place in Christchurch Quad – the salute being taken by the then Duchess of Marlborough the County President. The Standard represented the five divisions at the time. With local government changes to county boundaries in the early 1970s, Oxfordshire gained North Berkshire which led to our present 11 divisions.
In 1953 the county organized a Coronation Rally jointly with the Scouts in Blenheim Palace Park and Lady Baden-Powell was there as the guest of honour. Since then the county has organised many county rallies or camps which now take place every 5 years. The next one due is Quest 2020, just around the corner.
The county established fund-raising in 1970 [ Diamond Jubilee year ] and in the mid-70s our first County HQ was opened; Jubilee House near Beckley village. The HQ was on land bequeathed to us by Sir John Thompson of Woodperry House. Sadly the house came to the end of its useful life so the county began to fund-raise again and proudly opened its replacement HQ on the same site in 2006, also called Jubilee House. Over the years HQ has developed its camping site [ the house providing pack holiday facilities ] and includes an outdoor facilities block, amenities for pioneering, a climbing tower and abseiling equipment among other things. Earlier in 2018 we added a new Archive Resource Centre building where we will develop our heritage facilities.